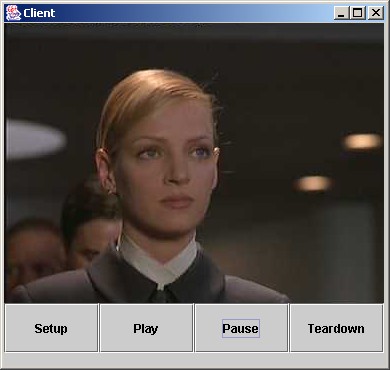 Video Streaming Using RTSP and RTP to Your Android Phone

We will provide you code that implements the RTSP protocol in the server, the RTP de-packetization in the client, and takes care of displaying the transmitted video. You do not need to touch this code. The partially finished java files can be found here.

Notice that the RTP/RTSP client was developed for desktop computer. You will need to port the software to Android, and do a live demonsration in the class.

There are 4 classes in the assignment.

Client: This class implements the client and the user interface which you use to send RTSP commands and which is used to display the video. Below is what the interface looks like. You will need to implement the actions that are taken when the buttons are pressed.

Server: This class implements the server which responds to the RTSP requests and streams back the video. The RTSP interaction is already implemented and the server calls routines in the RTPpacket class to packetize the video data. You do not need to modify this class.

RTPpacket: This class is used to handle the RTP packets. It has separate routines for handling the received packets at the client side which is given and you do not need to modify it. You will need to complete the first constructor of this class to implement RTP-packetization of the video data. The second constructor is used by the client to de-packetize the data. You do not need to modify that.

VideoStream: This class is used to read video data from the file on disk. You do not need to modify this class.

After completing the code, you can run it as follows.

First, start the server with the command

where server_port is the port your server listens to for incoming RTSP connections. The standard RTSP port is 554, but you will need to choose a port number greater than 1024.

Then, start the client with the command

The client opens a connection to the server and pops up a window like this:

You can send RTSP commands to the server by pressing the buttons. A normal RTSP interaction goes as follows.

The server alway replies to all the messages the client sends. The reply codes are roughly the same as in HTTP. The code 200 means that the request was successful. In this project you do not need to implement any other reply codes. For more information about RTSP, please see RFC 2326.

When the client starts, it also opens the RTSP socket to the server. Use this socket for sending all RTSP requests.

Here is a sample interaction between the client and server. The client’s requests are marked with C: and server’s replies with S:. In this project both the client and the server are very simple. They do not have sophisticated parsing routines and they expect the header fields to be in the order you see below. That is, in a request, the first header is CSeq, and the second one is either Transport (for SETUP) or Session (for all other requests). In the reply, CSeq is again the first and Session is the second.

One of the key differences between HTTP and RTSP is that in RTSP each session has a state. In this project you will need to keep the client’s state up-to-date. Client changes state when it receives a reply from the server according to the following state diagram.

When the server receives the PLAY-request from the client, it starts a timer which is triggered every 100 ms. At these times the server will read one video frame from the file and send it to the client. The server creates an RTPpacket-object which is the RTP-encapsulation of the video frame.

The server calls the first constructor of the class RTPpacket to perform the encapsulation. Your task is to write this function. You will need to do the following: (the letters in parenthesis refer to the fields in the RTP packet format below)

Because we have no other contributing sources (field CC == 0), the CSRC-field does not exist. The length of the packet header is therefore 12 bytes, or the first three lines from the diagram below.

You must fill in the header in the array header of the RTPpacket-class. You will also need to copy the payload (given as argument data) to the variable payload. The length of the payload is given in the argumentdata_length.

Here are some examples on how to set and check individual bits or groups of bits. Note that in the RTP packet header format smaller bit-numbers refer to higher order bits, that is, bit number 0 of a byte is 2^7 and bit number 7 is 1 (or 2^0). In the examples below, the bit numbers refer to the numbers in the above diagram.

Because the header-field of the RTPpacket class is an array of type byte, you will need to set the header one byte at a time, that is in groups of 8 bits. The first byte has bits 0-7, the second byte has bits 8-15, and so on. In Java an int is 32 bits or 4 bytes.

To set bits n and n + 1 to the value of foo in variable mybyte:

You can copy a 32-bit integer into 4 bytes in a similar way.

Suppose we want to fill in the first byte of the RTP packet header with the following values:

In binary this would be represented as

Students are encouraged to turn in a short report to address the following questions. The report must be in PDF format, and turned in along with the source code of your projects. Each question is worth 1 point.

We use a proprietary MJPEG (Motion JPEG) format.

In this project, the server streams a video which has been encoded into a proprietary MJPEG file format. This format stores the video as concatenated JPEG-encoded images, with each image being preceded by a 5-Byte header which indicates the bit size of the image. The server parses the bitstream of the MJPEG file to extract the JPEG images on the fly. The server sends the images to the client at periodic intervals. The client then displays the individual JPEG images as they arrive from the server.

Please submit a tar file (<last_name>.tar.gz) of your source directory (including the directory). Please email the instructor your file by 10:00 a.m. on Monday. In the same email, you may include an optional PDF file addressing the bonus question (please see above). Students will do a demo on the instructor’s laptop (schedule will be announced at a later time). A students gets 10 points if the smartphone demo is successful, and gets 1 points for correctly answering each bonus question.